Last time, we discussed what kinetic energy is, what momentum is, and what knockdown power isn’t (hint: it’s not real), but not how that information applies to our lives.  I hope to clear that up a little more in this article, by discussing the goals of bullet construction.  Once you understand what a bullet is trying to accomplish, you are more able to understand if it is actually able to accomplish that goal, and if it is what you want your bullets to do at all.

This is really where people who know what they’re talking about start to split into groups.  When it comes to pistol ballistics, some people want more penetration, and others want more expansion.  Both sides have good arguments, which I’ll try to objectively reproduce here.

Penetration is vital.  If your bullets don’t penetrate deep enough to reach something vital, then you are wasting everyone’s time.  Shot placement is king, but bullets that don’t penetrate deep enough rob even shot placement of it’s effectiveness.  The most well-known example of this is the 1986 FBI Miami shootout, where a pair of bank robbers killed 2 FBI agents and wounded 5 more before being laid low themselves.  The major takeaway is that one of the opening rounds would have killed one of the robbers, but it entered his forearm en route to his chest.  By the time the round exited the arm and impacted his chest, it had lost significant amounts of energy and did not penetrate deep enough to inflict a fight-ending wound.  Expansion is fine, but penetration is necessary.

That shootout was also 32 years ago, and 9mm defensive rounds are twice the bullets they were back then, due much in part to that very incident.  In fact, penetration is the last thing a prospective buyer should look for.  Ball ammo, the cheapest, crappiest, least useful ammo for defense (not including frangible) that you can find, performs so bad because it penetrates so much.  A ball round enters the body, does not expand, makes as small a hole as possible, and exits the back side of the target while transferring as little energy into the target as possible.  When a bullet exits a body, the energy it still contains is wasted.  Expanding bullets give the projectile more surface area in which to act upon the target, meaning more of that energy is used for wounding, more of that potential is being realized.  Penetration is needed so that vital organs can be reached, but most rounds fail because they don’t open and they over penetrate, not because they don’t open up enough.  Shot placement is indeed king, and expanded bullets give you a larger margin of error.  Wider bullets are more likely to hit vital organs, arteries, veins, nerves, spines, etc, ending the fight sooner.

Pictured: how your bullets should look after being fired.

Pictured: how your bullets should not look after being fired, including one that completely failed. 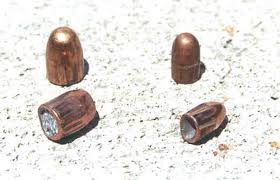 Pictured: The reason you don’t want to use FMJ ammo defensively.

Different bullet types interact with targets differently.  Here are the most common types of bullets you’ll encounter, and how they generally are expected to perform when impacting flesh, or a suitable flesh substitute, like ballistics gel.

–Full Metal Jacket:  No expected deformation, will likely just poke a small and insignificant hole straight through the target, known as “ice-picking”.  Generally, this is the least forgiving and least recommended bullet type to use for defense (see the third picture, above).

–Hollow Point: Made to deform upon impact, due to the cup-like shape on the tip of the bullet, where this ammo type derive’s its name.  The purpose of the deformation is to increase the bullet’s diameter without making the gun that holds them bigger, so that they have a greater surface area (utilize more wounding potential) while not keeping the guns that shoot them the same size.

–Jacketed Hollow Point: The same as the hollow points above, but the jacket on the outside helps the bullet penetrate little deeper before expanding.  These JHPs are the first two pictures shown above.  Jacketed hollow points are the most common type of defensive load on the market today.

–FTX: Hornady uses what they call “FTX” in their Critical Duty and Critical Defense lines of ammo, as well as their LeveRevolution line.  It is a JHP, but with a flexible plastic tip in the cavity of the bullet, which is designed to increase the performance of the bullet through barriers that tend to give JHPs problems.

–Frangible: Frangible projectiles are made form metal powder that is pressed in a mold, under very high heat and pressure, into a bullet shape.  These projectiles tend to be very lightweight for the caliber, meaning that they have very high velocities and kinetic energies.  They also are known for their lack of penetration compared to other bullet types, meaning that a lot of experts and people in the know are not very keen on using Frangible rounds for defense.  I used to be a fan, but my opinion has swayed.  If you get a good shot on a bad guy’s chest, they’ll do wonders.  If the conditions are not quite perfect, they can easily fail to penetrate deep enough to be effective.  You can make your own decision, but I’m hedging my bets and going away from frangibles.

–Solids: Solids are known to be both lightweight and deep penetrating with very little deformation, if any.  If that sounds contradictory, then you’ve been paying attention.  The reason for the seemingly at-odds attributes of solid projectiles is because solids are not made of the same metals as other projectiles.  Everything (but frangble) is made of lead, usually with a copper jacket.  Solids are made from solid copper, which is both lighter and stronger than lead.  Solids are generally not recommended for defensive use.  That being said, Lehigh Defense in Pennsylvania makes solid copper projectiles, many of which are designed for defensive use and adequately make up for the usual downfalls of solid projectiles.  LD’s bullets are expensive, boutique, and a little hard to come by, but they are definitely worth considering.

The above bullet types are common in semi-automatic handguns.  When looking at revolver ammo, other types are likely to be encountered.  A careful consideration of the initials and a Google search or two should clear up any questions you may have.

Here’s an article I ran across after writing this post, going into more detail about the topic of modern solid bullets.  It’s focused on rifle bullets instead of pistol bullets, but the concepts he mentions carry over to pistol rounds.

That’s a joke, there is no debate in rifles.  Rifle rounds contain so much kinetic energy that they have a hard time not tearing themselves apart while transferring it into the target.  This is known as ‘fragmentation’, and is actually sought after in some calibers, the most notable of which is 5.56/.223.

pic credit goes to The Wound Channel on YouTube.

That is a 16″ long block of gel getting absolutely demolished by a sub-quarter-inch-wide projectile flying about Mach 3.2, more than 3 times the speed of sound.  Just let those words sink in for a moment.  Now contemplate that .223/5.56 is possibly the smallest rifle round considered useful for defense against people.  To compare to the example bullets from last post, I’ll use the most commonly found load out of a 16″ barrel.

The above is only regarding shooting as a defensive action against human or near-human assailants.  If you are wondering about shooting game animals, there are mountains of forum posts and magazine articles regarding that very subject.  It is not within my knowledge base, and I don’t want to spread incorrect information.  Just know that bigger animals require bigger bullets and more penetration.

*Expanded bullet pics are found at Lucky Gunner.  They have a truly impressive database of ammo that they tested and sell.

Not all gun owners are old fat white guys. Not all gun owners only care about hunting and nothing else. Some of us believe in the freedom to make your own choices, to live your own life as you want to. The fat part is true, though. #dadbod View all posts by Sunshine_Shooter

One thought on “Bullet Construction”